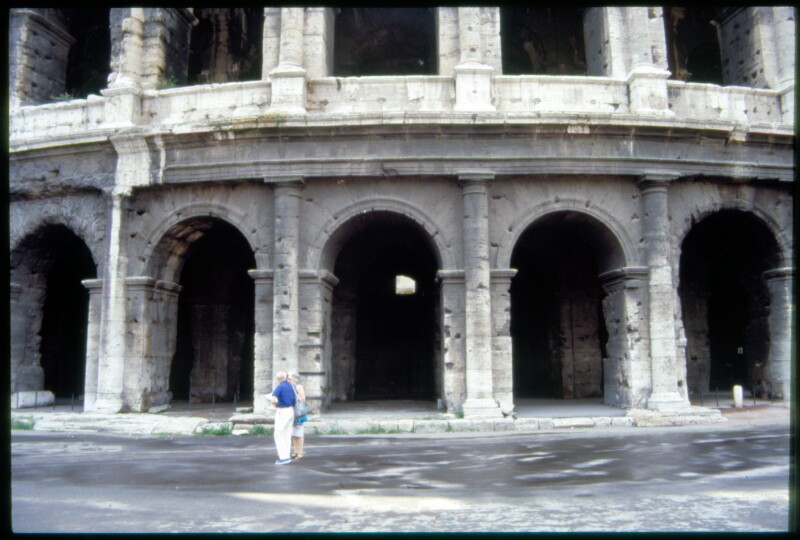 Inaugurated by Titus in AD 80, the Flavian amphitheatre as the Colosseum was originally known, had been begun by Vespasian in AD 70. It was the largest amphitheatre anywhere in the Roman world, seating around 50,000 spectators, perhaps more. It was refurbished heavily in the early 3rd century AD, following a severe fire, and again in the early 4th, mid 5th and early 6th centuries AD. More

The structure was built primarily in tuff and brick-faced concrete faced on the exterior in travertine. Marble architectural elements were used for decoration around the main entrances and the top of the seating on the inside. The exterior wall of the Colosseum is made up of three superimposed arcades, the first in the Tuscan order, the second in the Ionic, the third in Corinthian; a fourth storey contained small windows. On the first three levels the arches are framed by engaged columns supporting an entablature while on the fourth these columns are replaced with pilasters.

Beste, H. J. (2000). ‘The construction and phases of development of the wooden arena flooring of the Colosseum’, Journal of Roman Archaeology 13: 79–92.

Lancaster, L. (2005). ‘The process of building the Colosseum: the site, materials and construction techniques’, Journal of Roman Archaeology 18: 57–82.

Pensabene, P. (1992). 'The method used for dressing the columns of the Colosseum portico', in M. Waelkens, N. Herz and L. Moens (eds). Ancient stones: quarrying, trade and provenance. Interdisciplinary studies of stones and stone technology in Europe and Near East from the prehistoric to the early Christian period (Acta archaeologica Lovaniensia monographiae 4). Leuven: 81–92.