Selinunte is a small village in south-western Sicily, the site of the large Greek city of Selinus. Originally founded by colonists from Megara Hyblaea and Megara, Selinus developed into one of the largest cities in Sicily. It is famous for its series of large temples, the stone for which comes from the nearby Cava di Cusa quarries. The city was eventually destroyed by the Carthaginians in the mid 2nd century BC and only continued as a relatively minor settlement in the Roman period. 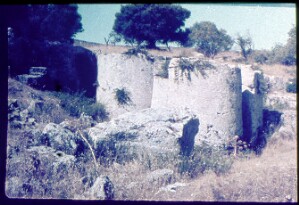